PLANTER BOX WITH SEATING AROUND THE ALDER TREE PART 2: BUILDING AND SIDING THE BOX 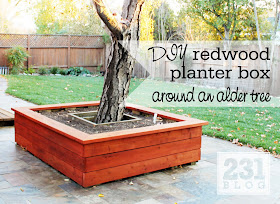 I just couldn't resist starting this post with the finished product, our completed planter box. Hopefully you'll stick around to see how we did it.


As I mentioned in my last post about the planter box, we wanted it to serve a few functions, including keeping the tree alive in the middle of the patio, serving as an area to add some color to our yard with plants, and being useful for additional seating during parties and events. We had to plan ahead, putting in the post holes and framing posts before we even finished the patio, but I think it was worth it. 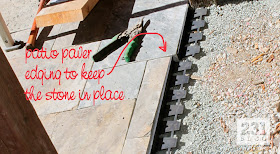 The first thing we did was add plastic paver edging at the edge of the patio where it transitioned into the box. This may have been an overkill move, but we had a some leftover from the patio project and knew that it would give us peace of mind that as time and the elements did their jobs, the partial patio stones that but up against the planter box would would stay in place.

The next thing we did was create a free-standing inner box directly around the alder. This inner box isn't secured to anything, so hopefully as the tree roots grow the box will move with it and the tree won't be harmed. We used two pressure treated doug fir 2" x 10"s that we glued together with liquid nails, then fastened with additional screws (you know, just for good measure). 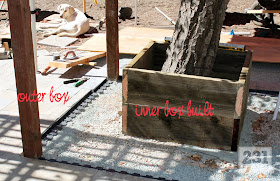 The outer box was another story. We started by measuring the height that we would need for the two stacked 2' x 10"s that made up the outer box, then Ryan used a circular saw to cut the posts to height. 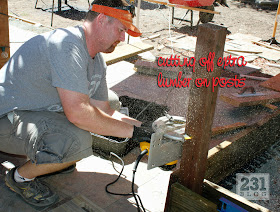 Once we had the posts cut we checked to make sure everything was level (at least side to side, there was a little slope on the patio and hence a little slope top to bottom) and got down to business affixing the pressure treated lumber to the frame.

We used 3" Spax screws to secure everything together.

And because pressure treated lumber is dense, we predrilled every hole before screwing in the Spax. Ryan, who has obviously done this before, used handy two drill system. One had a drill bit and the other had the hex head bit to screw in the Spax. It really speeded up the process. 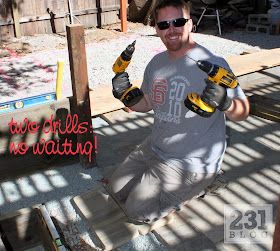 Between the first and second layer of pressure treated, we used another liberal amount of liquid nails to secure the two boards together vertically.

Ryan was convinced that we couldn't just put the redwood siding directly against the pressure treated lumber for a couple reasons. One, he decided that the two pieces of wood directly against each other would trap moisture and cause the redwood to deteriorate more quickly. And two, he wanted to create some additional support for the "seat" that would top the planter box. I protested at first, but decided to choose my battles, and we went ahead with creating a framework to attach the redwood siding to. We were able to use a lot of scrap lumber for this project, screwing 2" x 4"s into the pressure treated lumber at intervals, until the box looked like this. 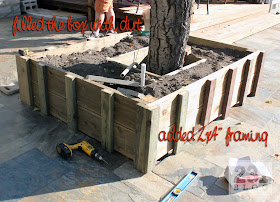 Here's a side view of it once we got the redwood siding in place. The extra space between the two layers of wood will definitely add some extra support for the seat. 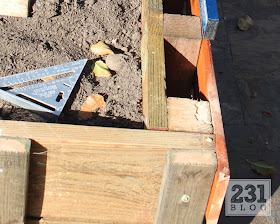 We bought the rough edged 1 x 6" redwood siding boards because they were much less expensive than decking boards for the sides, and 2 x 10" redwood boards for the seat. We gave them a nice sanding and stained them up to bring out the red color. 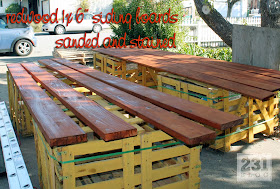 We used Cabot Australian Timber Oil in Mahogany Flame. It's an oil based stain and protectant that we've had good luck with, and we love the red color of it. 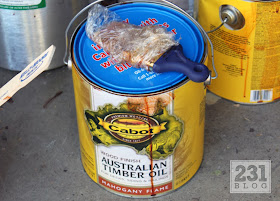 Once the boards were dry we used red deck screws to screw them in to the framing. They definitely "prettified" the until then ugly box. 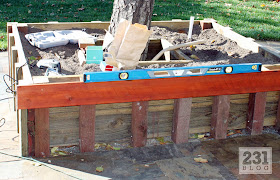 We started from the top and worked our way down. We didn't take the time to miter the edges, but rather chose to overlap the short sides in a sort of "basketweave" pattern. Here's the box with the full siding on it. Love it. 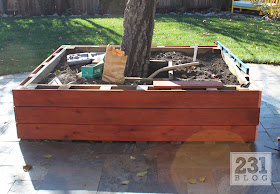 Mitering the top edges to 45 degree angles was tricky, but after a little shimming we had a beautiful redwood seat to top our box. It's slightly narrower than an actual bench, but it will definitely do the trick. 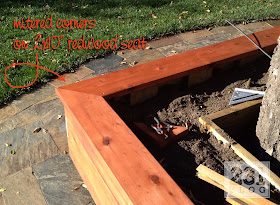 Even McKinney likes it. 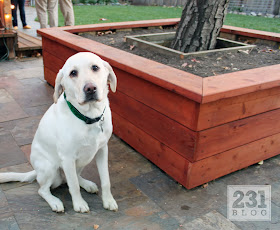 And here's a before and after for you. I love the way the red box complements the green lawn and picks up the rust tones in the stone, and I can't wait to fill that planter box... I'm thinking succulents. 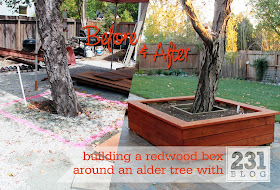 Last, here is a link to the first post where we dug the post holes too, just in case - Planter Box Part 1: Setting the Posts.

Whew. That was a lot. Thanks for sticking with us.

Linking to: Inspire Me Please, Work It Wednesday,
Hilary at 6:02 PM
Share